The Vestland Climate Grid is a set of twelve calcareous grassland sites set up as a ‘climate grid’ reflecting the major bioclimatic variation in Norway, with three temperature levels (alpine, sub-alpine, boreal); separated by ca 2∘C in mean growing season temperature - replicated in four levels of precipitation (separated by ca 700 mm in mean annual precipitation). The climate data used to select these sites are interpolated at with 100 m resolution from the normal period 1961-1990 (met.no 2009). Other factors such as grazing regime and history, bedrock, vegetation type and structure, slope and exposure were kept as constant as possible among the selected sites. Geographical distance between sites averages 15 km and ranges from 175 km to 650 m.

Within the 12 sites constituting this climate grid we have conducted a  number of replicated experiments to study the direct and indirect effects of temperature change on plant populations and communities (SeedClim), the role of the plant functional groups graminoids, forbs, and bryophytes in regulating ecosystem functioning and biodiversity (FunCaB), and the role of interactions from novel competitors and warming in affecting alpine species populations and biodiversity (INCLINE).  The experiments and data are documented in our data documentation files. Please ask if you are interested in learning more! 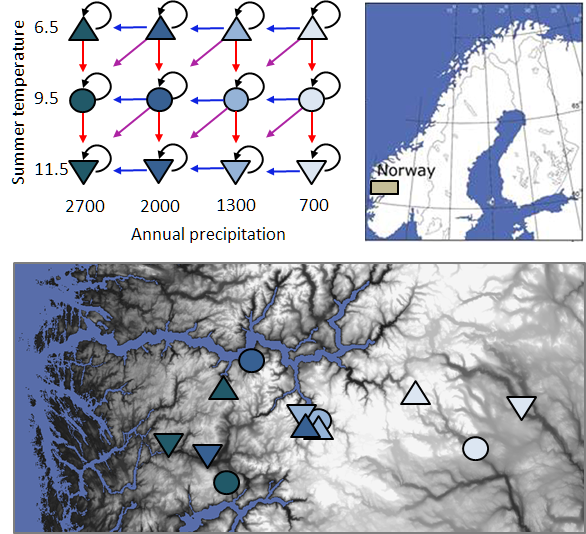 Map of the VCG study sites in Norway and conceptual diagram of the climate grid along temperature (mean of 4 warmest months/year) and mean annual precipitation (mm) gradients used in the transplant experimental treatments. We have climate stations and intensive monitoring of plants, and measure a number of predictor- and response variables in all sites. All plots are situated within a total area of ca. 75 – 300 m2 within sites. All sites are moderately grazed, but were fenced to avoid animal disturbance. They are mowed annually to mimic past disturbance regimes.